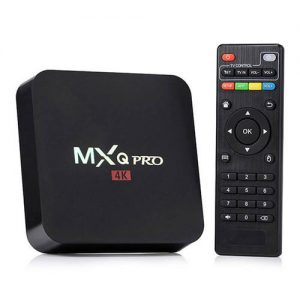 MXQ PRO is based on the latest Android 7.1 OS, with high speed and smooth, designed to turn your regular TV into a smart one.

The processor in this device is an Amlogic S905W, fully supporting premium 4K UHD contents with a powerful 64bit CPU and Mali-450 penta-core GPU combination in place to handle 4K output and offers strikingly realistic pictures.

While your average media box might only accept 1080P video playback, this gadget plays just about any 4K sources you could throw at it. Furthermore, it moves out into reality the fantasy of VP9 hardware decoding alongside the H.265.

Like any Android based media players, it brings, aside from the preinstalled KODI 17.3, full access to Google Play Store apps like Neflix, Vudu, Skype, Picasa, Flick

Free delivery on your orders! Dismiss